“People assume they are too wild to tame,” said Mr Thomas, of Crymych, Pembrokeshire. 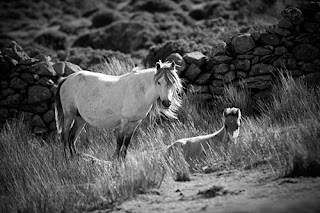 Here is some more about one of Britain's wildest pony breeds (and one of the most endangered) living on the Carneddau Hills in Wales.

They are actually pretty wild, on alert all the time and are very suspisious of anything unusual happening around them.

While I was there I was quietly watching a group of ponies having a nap in the sun.  They were all quite relaxed, but some were still on the lookout. 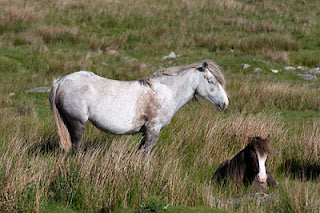 Welsh ponies dozing in the sun 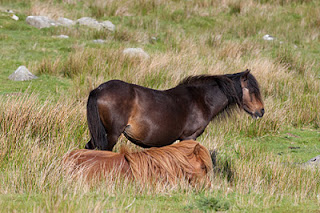 All of a sudden, out of no where came a scary plastic bag flying about on the wind.  The ponies were all instantly awake and running from the 'predator'. 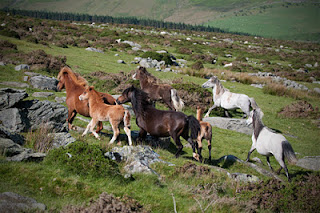 They ran for a bit then stopped to see if they were being chased by the scary bag, and when they realised that the bag was just a bag, they soon settled down again and began to graze.

An article from Wales online written in June 2011 explains how the wildness of the ponies could be contributing to the decline of them, and why the farmers who owned the ponies decided to ask Barry Thomas a local horse whisperer to help - here is a small piece from the article:


" “People assume they are too wild to tame,” said Mr Thomas, of Crymych, Pembrokeshire.

“People assume they are too wild to tame,” said Mr Thomas, of Crymych, Pembrokeshire.

Read more: Wales Online http://www.walesonline.co.uk/news/wales-news/2011/06/25/happy-horse-whisperer-who-tamed-wales-wildest-mountain-ponies-91466-28938196/#ixzz2DcPU11D1
“Therefore they are not marketable, they cannot be sold, they cannot fetch a price, so the farmers cannot afford to keep breeding them.

“There are only around 200 of the ponies left on the hills of Snowdonia, so anything that can be done to save them must be done.”

After an end-of-season sale last year in which 45 of the Carneddau ponies were sold for just £430, Mr Thomas was asked to see if he could do what nobody has ever done before: tame and train a Carneddau pony.

The Carneddau Pony Society hoped the training would help increase the animals’ market value, which in turn would give the Snowdonia farmers the incentive to breed them."


A similar thing had been done before by Monty Roberts, the American 'horse whisperer' when he had tamed and trained a wild Mustang.  Barry Thomas is actually one of Monty's students and was glad to accept the challenge.

He captured 2 of the wild ponies and brought them back to his farm.  He did succeed in taming and training them, and there was a programme filmed about it but unfortunately I can't find it to watch.  Whether it has helped with the popularity of the Carneddau wild ponies, or whether people will want to own them is to be seen, but the Carneddau ponies more domesticated cousin - the Welsh section A pony, is very popular.  In the next blog I will look at the breed characteristics and see why they are such great little ponies. 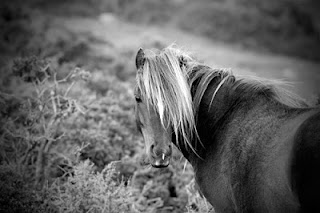 
Posted by mitch mcfarlane at 05:51 No comments: 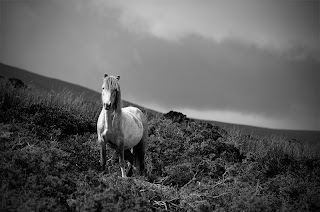 This isn't the first time the Welsh mountain ponies have been threatened with extinction.  The ponies were nearly made extinct 100's of years ago, around the beginning of the 16th century.  Apparently King Henry 8th, who had a reputation for killing anyone and anything that got in his way, demanded that the ponies all be destroyed.  His reasons for this were that they were too small - too small to carry a knight in full armour !  Luckily he didn't succeed, and some of the ponies survived.

The Romans recognised their strength and agility though, and used them for many jobs while they were in Britain, and even took some back to their homeland .

They were also used in the 19th century by the coal miners to pull carts down into the coal mines.  That must have been a pretty miserable life for them.  Some of them even lived in the mines, staying in stalls built down there and living on hay, never seeing the light of day.

All this has made them very tough and strong, and made them into the hardy little ponies that they are today.  The welsh pony and cob society says "Bred in the mountains and wild regions of Wales for many generations, their acknowledged beauty does not mean they are merely a 'pretty toy' — centuries of 'survival of the fittest' has ensured the sound constitution, iron hard limbs and great intelligence"

You  can definitely see they are tough and hardy little ponies, but they are also very beautiful.

Some more photos here of the Welsh mountain ponies on Carneddau.  It started rain while I was photographing them, but they were starting to get used to me and I didn't want to leave so I carried on taking photos.  I didn't realise how wet my camera lens was getting, until I look at the photos later - you can see the photos getting more and more misty - but I actually think it gives quite a nice effect, kind of like a soft filter ! 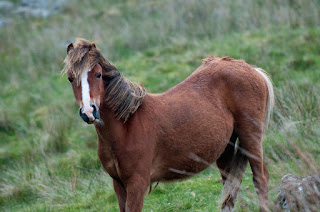 This one has dreadlocks as he's loosing his winter coat. 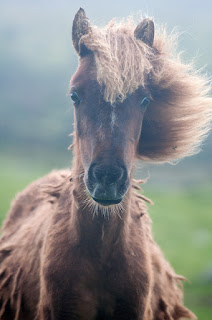 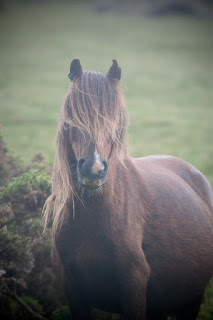 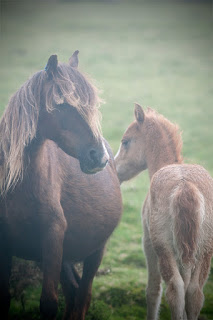 Even though people have recognised the ponies usefulness and adaptability during the centuries, they are still facing an uncertain future.  Some are being used for land conservation, but they are not very saleable, going for only a few pounds each at the sales.  In the next blog I will write about how a Welsh horse whisperer was bought in to try and help improve this.

Posted by mitch mcfarlane at 08:50 No comments: