There were about 4 or 5 foals in the herd I was watching, all only a few days old.   One of them had spotted me watching him and got a bit shy.  He went and hid behind a gorse bush, so I couldn't see him.  It didn't take long for him to got curious though and he peeped his head out from behind the bush. 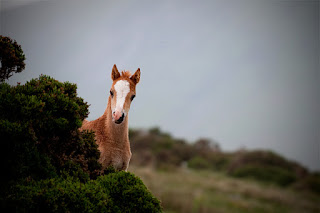 He kept getting shy and hiding back behind the bush, and then peeping out again, each time a little bit further.  He was being very cheeky and was definitely playing with me !  In the end he realised I was no threat and wanted to show off.  He ran out from behind the bush and started running around, keeping making glances my way - I couldn't help laughing at him - he was so cute. 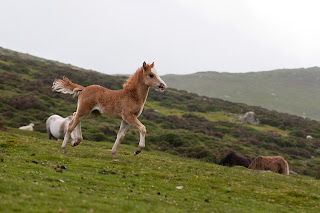 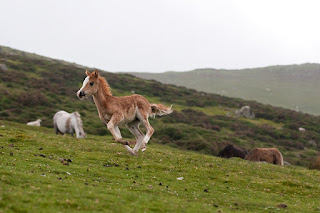 He ran around for a few minutes - trotting, cantering, galloping and bucking - he was having great fun, but then he suddenly got embarrassed, and ran back and hid behind his mum. 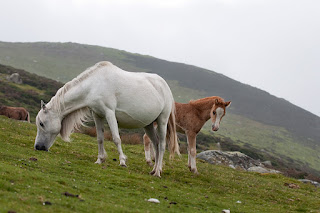 He was still watching me and knew I was watching him.  After a while he ran off again, up and down the hill, round and round, until he got tired and ran back to his mum for a rest. 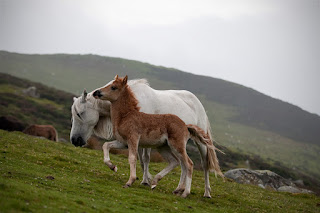 I had the best time watching him, and he made my day.  Its amazing how he was only a few days old but was able to do all the paces and even buck already !  He was a real show off as well, maybe he will grow up to be the stallion of his own herd one day.

This is a lovely shot of his mum. 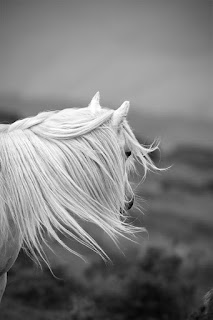 Lets hope that the Carneddau ponies future is safe, and that they continue to grow in numbers, and remain on the hills.  Luckily we are now starting to realise that the wild and feral native ponies of Britain are very important and need protecting.  They are very important to our heritage, but also are very useful in land conservation.  This is a quote from a very interesting BBC news article from 2008:

“Theses mountain ponies are very special to us in Snowdonia. Not only do they contribute to our cultural heritage, the Welsh mountain ponies and their genetics has an important role to play in sustaining the diversity of plants and insects on the mountain slopes. Their grazing patterns mean that they keep vegetation low on the mountain in winter and provide a good source of food to the chough during the winter. This in turn allows the fragile habitats of the highland to be revitalized when the sheep aren’t there.”

You can read the whole article here

Article on the welsh carneddau ponies


Posted by mitch mcfarlane at 07:44 No comments:

As part of my plan to travel the length and breadth of Britain to photograph all the British native ponies in their native environments, I next visited Wales.

After quite a long drive of about 6 hours, and after driving through some places with funny names ( one place was called Pant, which we thought was really funny due to being very immature ) we arrived at the South of the Snowdonia National park.

I hadn't had time to do much research on where to find the feral Welsh ponies, but I knew they were somewhere in the park. It wasn't until the next day when I started driving through the park that I realised it is massive !

How on earth was I going to find the ponies ?  I asked around at some tourist information places and finally a woman found out they were near a place called Aber common and pointed to an area on the map near the top of the park.

We drove to the area but couldn't find a road that seemed to go where we wanted to go.  We eventually took chance and headed up a very steep, tiny single track road.  We got to the top and there was a car park and some paths up onto the hill, so we decided to take a look.  A man walking his dog just got back to the car park and I asked him if he had seen any ponies.  He said no he hadn't seen any ponies today, but he was a local and said they were around somewhere up on the hill or in the valley.  He said there are 3 small herds in different areas, and some had just had foals.  Sometimes he would see them other times he didn't.  I was so excited we had found the right area, and that they had foals, but I was a bit worried we wouldn't find them.

As we walked up through the gate I saw a National trust sign that said 'Carneddau' and remembered that during my research I had read about the feral Carneddau ponies, so we were definitely in the right area for seeing some proper feral ponies. The Carneddau ponies are in the group of Welsh ponies called Welsh section A mountain ponies, and the ones on Carneddau common are truly feral and have been here for 100's if not 1000's of years.  Welsh mountain section a ponies are on the endangered breeds list as vulnerable, although the wild ones are extremely rare.

We walked up the hill to the left rather than into the valley, and carried on a little.  After about only 1/2 mile or so we spotted the ponies in the distance - I couldn't believe how lucky we were.

We crept up slowly and quietly as they are not handled or used to humans being too close. 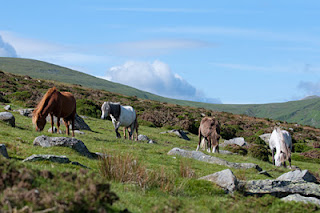 I sat and watched them for a while, but kept my distance as they knew I was there.  I slowly crept a little closer.  One of the ponies gave me a shifty look and moved the others away a bit.  He was beautiful and strong, and had the most amazing long mane.  I knew by the way he was behaving that he was the stallion. 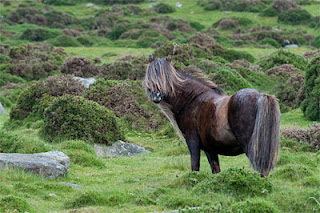 I hung around with them for a few hours and they gradually got used to me, allowing me to get fairly close, but never too close.  I managed to get some lovely photos of them, so please read the next blog to see more photos and find out more about these lovely little rare and endangered ponies.