The many jobs of the Fell pony

The Fell ponies have an interesting history, and have had many jobs through the years.   They are native to the fells of North West England, and it's thought that the breed was established as far back as the Roman times, when they would have been caught and tamed from their natural habitat, and would have been used by the Romans for transportation of materials to build Hadrian's wall. 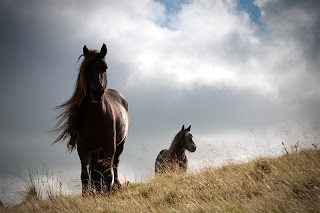 Fell ponies on the fell


In the winter of 1492-93, 11 Kendal traders made a total of 14 journeys to Southampton with pack horses carrying loads of cloth - a journey of about 300 miles, which even on today's modern roads would be a tough journey !

Fell ponies were even used for transporting the deceased to graveyards (they are still used today, by undertakers who conduct traditional horse drawn funerals).

Over the years the Fell pony's more domestic duty would have been as a pack pony, transporting minerals from the mines and corn to the mills. They would also have been used on farms for general duties such as harvesting, haymaking and carrying a shepherd across steep terrain.   They were also used to hunt wolves that might have been a threat to the sheep on the fells. 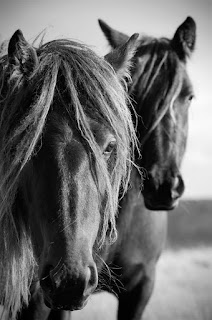 
It is said that during the eighteenth and nineteenth centuries, Cumbrian smugglers would have used Fell ponies for transporting their contraband from the coast.

The Post Office also used the Fell pony to deliver the mail to the most remote areas.
During the late 1800s, trotting races grew in popularity at social events such as shepherds meets and fairs. Many Fell ponies excelled at this sport, with some Fell ponies even attracting local fame. 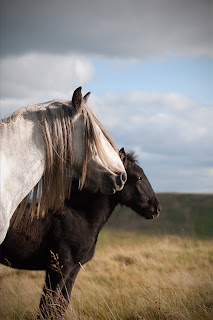 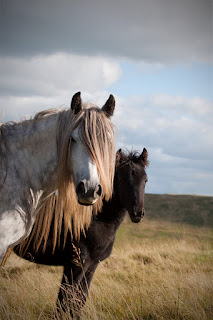 ps - if you click on the photos you can see them larger (and better) :-)

Posted by mitch mcfarlane at 08:46 No comments:

I have now learnt something very interesting about Fell ponies - I had always thought Fell ponies only came in black, but while up on the Fells I noticed quite a few of the ponies were grey - there were a few that were very dark steel grey and a few that were light grey. 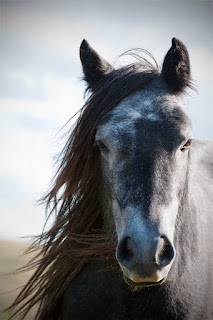 I asked the owners of the ponies if they were all Fells and they told me that they were, and that Fell ponies come in brown, black, bay and grey.  Black is the predominant colour, although dark brown used to be the predominant colour many years ago.  They also mentioned that the grey used to be quite rare, but they are now becoming more common.  They own a grey stallion. 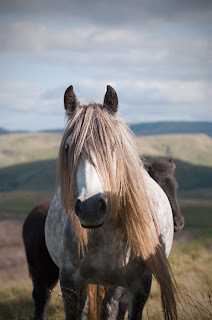 It was interesting to hear about their herd and how they manage the ponies that live on the Fells.  Carole told me

"We have approx. 16 breeding mares on the fell together with young females who will in time be bred from as the older mares cease to breed.  There  are also one or two geldings which we offer for sale. The stallions (2) are  kept down at the farm as there are bridle paths across the common and it would not be safe for riders to encounter stallions and also we want to be sure  which mares are mated with which stallions.  The herd stays on the fell for most of the year.  The mares are brought down to foal in May / June and to be covered again by the stallion, after which they are returned to the fell until late October, when they are brought down in order for the foals to be weaned.  The mares are returned to the fell and the filly foals are wintered inside for the first winter.  Colt foals  (apart from any being kept as future stallions) are sold at the Fell Pony sale at the end of October at Penrith." 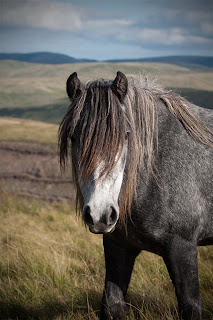 Some of you readers might not have read my older posts, where I mentioned that many of the British native breeds of pony are on the 'Rare breeds survival trust' watch list.  This is a list of the breeds of British ponies that are at various stages of being endangered.  It goes from 'critical' to 'at risk'.  The fell pony is on the watch list as 'at risk', which isn't as bad as some of the British breeds, but is still not very many - it means there are only 900-1500 breeding mares in the world.  This isn't really a huge amount, so its good to see that there are several studs like Lunesdale  still breeding and promoting this lovely breed, as well as a breed society

Hopefully one day these beautiful ponies will be off of the list all together. 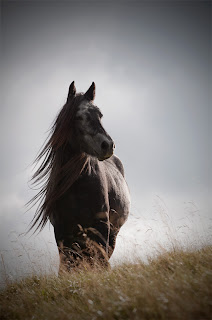 Posted by mitch mcfarlane at 10:13 No comments: