So, I'm back on track with the British native pony blog.  I have been away a bit too long, but I'm planning on writing more regularly now.  I have lots of lovely horse and pony photos to share.

Highland ponies are next on my list.  I have a few from a trip we made to Loch Ericht Estate, near Dalwhinnie, back in April.  We also went away last weekend to the Glenfeshie Estate near Aviemore.

There are no Highland ponies in the wild any more, so the only way to really see them roaming free in their native environments (not in paddocks) is to go to one of the large Scottish estates where they keep Highland ponies.  Most of these estates still have the tradition of deer shooting during the hunting season.  A lot of them invite their shooting parties to stay and go hunting for sport.  Many of them still keep Highland ponies for carrying the deer back to the house.  When they are not being used during the hunting season, they are often turned out to live semi feral out on the Highlands.  The estates own 1000's acres of land covering mountains, glens, moors and lochs.

We had researched and found that there are usually Highland ponies living out semi feral on the Glenfeshie estate near Aviemore.  There is a long glen (valley) with a wide river running through the middle.  Usually the ponies are to be seen on the East side of the river so that's where we decide to look for them.

The Glen is private land so you can only go in on foot or bike.  We were walking.  We parked the car and started our walk along the river.  The day was lovely and sunny and great for photos so I hoped we would find the ponies.  It is very scenic and it was a very nice walk, but we had to walk for over 5 miles before we got to the end of the glen, and we still hadn't seen the ponies.  Then we spotted them...but, they were the other side of the river. 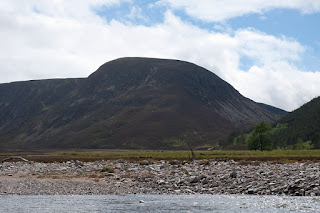 The river is quite wide, and very cold so we didn't fancy crossing.  There should be a bridge about 1 mile back, but it had been washed away a few years ago, so there was no way to get to the ponies.  How frustrating.  The only thing we could do was walk all the way back and try again the next day, but on the other side of the river, so we walked all 5 miles back along the river.

Typically, the next day the weather was dull, and overcast - not great for photos, but we decided to go anyway and hope it cleared up.  We walked the 5 miles the other side of the river to the grassy spot where the horses had been the day before, but they weren't there.  They had walked down to the river.  Thank fully they hadn't actually crossed back over, but they were standing in the stony dry river bed, which isn't as photogenic as the lovely bit they had been in the day  before.

Anyway I did my best and took some photos.  It was just really frustrating that the day before they had been in a much nicer place and the weather and light had been way nicer - but that's what being a photographer is all about !
Here are two photos of the ponies - more to come soon. 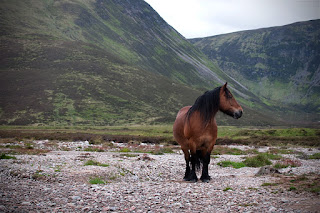 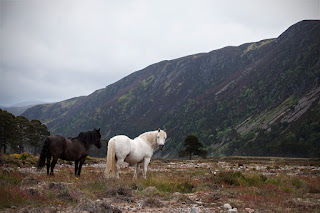 *You can click on any of my photos to see them larger.

Posted by mitch mcfarlane at 10:01 No comments: