I was very taken with the Eriskay ponies on the Island.  I thought they would be very timid and wary of humans, so at first I stayed quite a distance away from them and kept very quiet.  I had my long lens on my camera in order to get close enough shots. 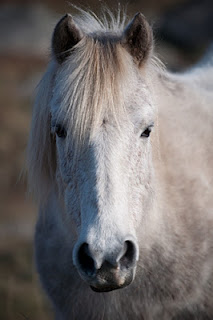 But within a few minutes I was surrounded by inquisitive and nosey ponies !  They all wanted to know what was going on, and came over to have a look.  Even the little foals and yearlings were coming right up to me and nudging me.  It actually became quite hard to take photos of them as they kept shoving their noses into the camera lens. 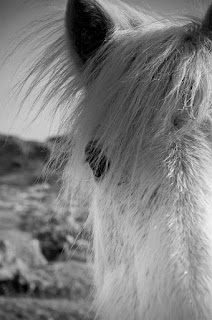 After I had said hello to them all and they knew I was a friend they gradually wandered off to graze, and occasionally popped over to say hello. 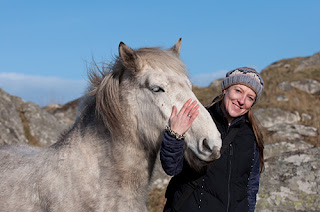 My new friend - I want to take him home !

The Eriskay pony society breed standard says of their temperament:

"Eriskay Ponies should be placid and amenable with no signs of viciousness or aggression".

This is certainly how this little herd were.  And it's why they made excellent all round, useful ponies back in the old days, when they did a bit of everything, and had to be relied on to be safe and sound for the children to ride.

Quote from the Eriskay pony society:

"Today, Eriskay Ponies can be seen competing in all spheres of equestrianism. Members of the Eriskay Pony Society regularly take part in activities such as hunting, dressage, show jumping, show hunter, cross country, pony club eventing, team games, western riding and driving. Although they stand between 12.0 and 13.2hh they are strong for their size, have terrific stamina and can carry a light adult with ease. They also make excellent driving ponies, Lesley Cox from Cheshire has had tremendous success with her tandem driving ponies, competing at FEI level and winning regularly.

Other Eriskays make excellent family ponies, with their human friendly characteristics coming to the fore playing football in the garden with the kids, or working with special needs children as RDA ponies."

From what I saw of these lovely ponies, I would definitely recommend them as a child's or family pony ( or even a small adult like me ) :-) 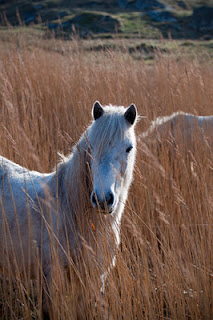 Eriskay pony in the reeds 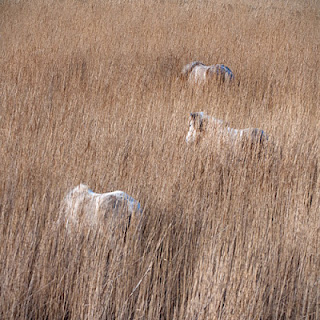 Eriskay ponies in the reeds

Posted by mitch mcfarlane at 07:53 No comments: