When we first arrived at the Exmoor National park we drove through some pretty villages, and then we went over a cattle grid, so we knew we were into the open part of the park and that the Exmoor ponies would be somewhere - but it's a huge area and there are only small numbers of ponies, so we had to drive really slowly and look very carefully.  The Exmoor ponies are very camouflaged amongst the colours of the moor.

Thankfully, due to my well tuned 'pony radar' I spotted something moving in the bracken.  We slowed down and spotted a few more dotted around.  It was a herd of ponies.  I was so pleased as we had come a long way for these ponies ! 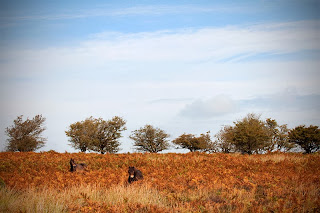 
As you can see from the photos the Exmoor pony is well fitting for their environment.  Their colouring falls within a limited range of bay, brown or dun, with black points (with no white markings) and as such they blend in very well against their native background of heather, grass and bracken.  They should have mealy markings on the muzzle and around the eyes. 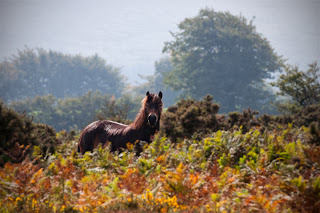 It's not just their colouring that is suited to the environment - they are very well adapted to survive out on the open and sometimes very bleak moors.  The ponies are very stocky and strong, with deep chests and large girths, the large capacity of the digestive system is important in winter as they consume large quantities of rough material which provides them with internal warmth.

The prominent flesh around the eye provides a defence system against harsh weather, and is known as a "toad eye" .

The ponies have neat, hard feet, and their legs are short.   They have well laid back shoulders and a deep chest. The ribs should be long, deep, well-sprung and wide apart, with a broad back and level across the loins.

In summer their coat is close, hard and bright, but in winter they grow a coat in two layers - the hairs next to the skin are quite fine in texture and form a layer of insulation; the outer hairs are coarser and greasy giving waterproof protection.

The tail is neatly set in and the fan of short hairs near the root of the tail is called a snow chute . The mane, forelock and tail are thick and full, and also shed water efficiently. 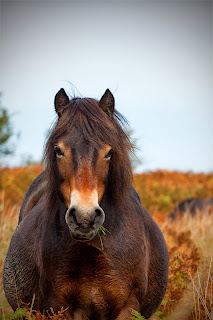 It's sad to think that these amazing British native ponies, who are so adapted to our environment, are so rare and are on the rare breeds list as endangered.  And what's even more tragic, is that many of the foals born on Exmoor are unwanted - no one wants to buy them and many end up as zoo food !  Thank fully many of the breeders and a charity called moorland mousie trust are working hard to change this.  More about that in my next blog, so be sure to check back soon.

Please click on the photos to see them larger. 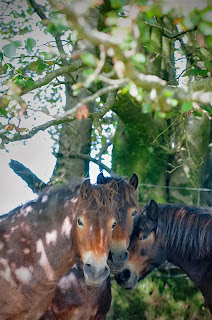 Posted by mitch mcfarlane at 04:49 No comments: