What is the difference between dun and buckskin ?

Back in April of this year, we went to stay for a long weekend up near Aviemore in the Highlands.  While we were there I wanted to see if I could find any Highland ponies living feral to photograph for my British native pony project.

We found some information from various people saying they had spotted ponies on the Loch Ericht Estate, near Dalwhinnie.  The ponies are wintered out on the estates vast land, but are quite often seen near Loch Pattack.  As with all of these large estates, people are welcome to walk, cycle and horse ride on their land because of the Scottish right to roam laws, which is great.

The land where the Highland ponies might be, and Loch Pattack are at least 7 miles from any public roads, so we decided to take our mountain bikes and ride up to the area along a track.  Even though it was the middle of April, it was freezing, and there was still snow on the higher ground - we were having extremely cold weather for that time of year !

We wrapped up with lots of layers and I put all my camera equipment in my rucksack and off we set.  It was a lovely ride, the scenery was beautiful and while we were cycling I was warm enough, but as soon as we stopped I started getting cold.  Unfortunately, I only managed to shoot for about an hour before I was frozen and I had to give up, but I got a few really nice photos. The Highland ponies when we first spotted them

As you can see there were four of them, and some really pretty colours - a dark mouse dun, a yellow dun, a very dark dapple grey and a white one.

Two of them were very inquisitive and decided to come over and see what we were up to. 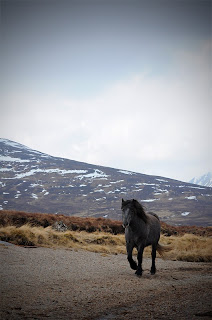 Look at the highlights on this one - women pay lots of money to have hair like that ! 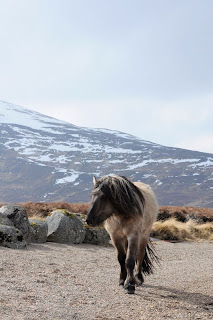 This brings me to a very interesting question - What is the difference between a dun and a buckskin ? (my Icelandic is called buckskin on her passport, but she looks the same as this Highland pony)  Highlands are never classed as buckskin, only dun - so are they the same thing?  Actually, no, even though they can often look very similar.  It's all down to genetics.

Both dun & buckskin can be a golden/yellow/creamy coloured body with a black mane, tail and legs.  The body colour can range from a light, creamy colour to a deep, rich yellow or gold.  But they are different because each of them come from a different dilution gene on a bay base.

Buckskin comes from a cream dilution gene on a bay horse.

Dun comes from a dun dilution gene on a bay horse.

Dun horses also always have at least one primitive characteristic – a dorsal stripe, striping on their shoulders, legs and/or forehead.
For a more detailed explanation, with pictures to help, see this article:
Dun or buckskin ? That is the question !
You can just see his dorsal stripe in this photo. 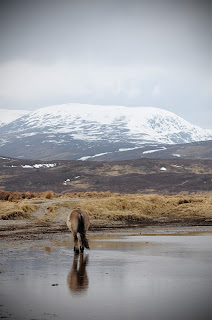 Posted by mitch mcfarlane at 10:03 No comments: