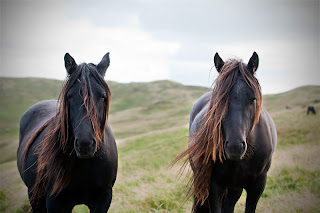 Shawn and I decided at short notice to have a week in the lovely lake district in Cumbria, as it's only 2 hours drive from where we now live, and we hadn't been there before.  This is the area that the beautiful Fell ponies originate from.  I couldn't visit that area and not try to find some feral ponies to photograph, so I did a quick bit of research to see where I might be able to find some.

I emailed the owners of Lunesdale Fell pony stud - they are Fell pony breeders that have grazing rights on Roundthwaite common, and asked if there were any Fells out on the common that I could photograph.  They said there was, and I was welcome to go to the common and look for the ponies, but they also mentioned that they may be hard to find.  What I hadn't realised was the common is really large - over 6 miles long and quite wide, including many hills and valleys.  They normally go out on a quad bike to find them and even then it can take hours ! 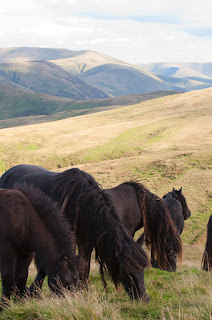 The huge area where the Fells roam


Well, I really wanted to see them so Shawn and I (it was me really) decided to go for a drive around the area and see if we could find a way up to the common and decide if it was worth looking for them.  We drove to the area through some country lanes and into a little village.
I looked up onto the hills ahead, and guess what - I spotted some tiny black dots on the horizon.  Shawn thought they might be cows, but I was convinced they were ponies.

We stopped and asked a farmer if we could get up to where they were, and he said the best way was to go back down the road, and then up through some fields onto the ridge, and then to walk along the ridge.  So we parked the van, near the place he had pointed out and got ready to walk up.  Just then a cross looking man came out of his house and asked what we were doing, he then said the way we wanted to go up would involve walking through his field, and he told us he would not allow us to go through his land !  We were a bit disappointed, and headed back towards the first farmer.  He very kindly took us to one of his fields further along and showed us another way up to the ridge.  The field was really, really steep, and I was a bit worried as he said there was a bull in the field somewhere !

After about 1/2 hour climbing up the hill we got to the stone wall around the common and climbed over.  The ponies were right there :-)  I felt so lucky that I had found them. 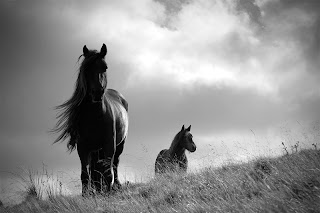 I very quietly took a few photos from a distance, as I didn't know how tame they were.  They tolerated me but as soon as I tried going closer they ran away.  So I took a few more photos from a distance, then this time got closer and closer very slowly.  They let me get quite close, and I just watched them and took photos for ages.  After a while they realised I was no threat, and got quite inquisitive - quite a few of them, including some foals, came right up to me and sniffed and nuzzled me.  It was such a lovely feeling that they felt that safe with me. 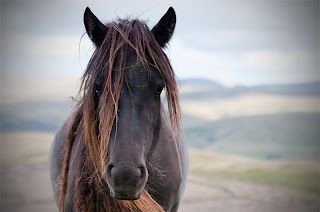 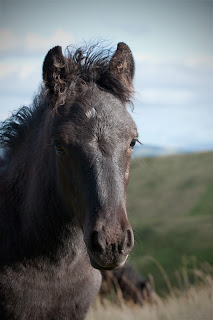 I had a lovely time being with these beautiful native ponies, and it is great to see them in their natural setting, looking healthy and as nature intended.

Please look back for the next blog as I have lots more lovely photos, and I will be writing about Fell ponies, and their origins, characters etc

Posted by mitch mcfarlane at 09:08 No comments:

Happy new year to you all - I hope you had a good time over the holidays.

I really must get back to the blog now.  I have lots to catch up on - I already have the Fell ponies and New Forest ponies to write about, and this year I would like to visit Shetland or the Highlands to photograph them, and I also want to go to Yorkshire to photograph the Dales ponies.  Then that just leaves the Exmoor and Dartmoor ponies.  I'm not sure whether to include the Irish Connemara ponies in this project as I'm not sure whether they are British ( as far as I know they only roam feral in Southern Ireland, although they would have once been all over Ireland, and Northern Ireland is British ! )  What do you think - please leave your thoughts in the comments as I would love to hear your opinions on this.

Just one last blog with photos on the Carneddau Welsh mountain ponies: 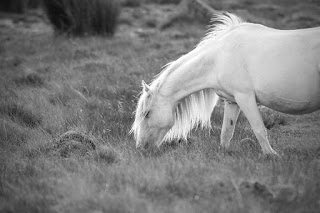 The wild Welsh mountain ponies might have an uncertain future, but the section A Welsh ponies, which are the closest  to the wild mountain ponies, are very popular.  There are also 3 other types of Welsh pony categories ranging in size from under 12hh to exceeding 13.2hh with no upper limit.

The Welsh Stud Book contains registration details of four "types" of Welsh Ponies and Cobs.  These types include the Section A Welsh Mountain Pony, Section B Welsh Pony, Section C Welsh Pony (Cob type) and Section D Welsh Cob.  Each Section, or type, has specific characteristics, but all retain the pony character, versatility and excellent temperament of the Welsh breeds.

Because these ponies were the hill farmers' main means of transport, herding sheep and wild ponies over rough and mountainous country, they had to be hardy, balanced and fast.  This ensured that only the best were bred from. These qualities, combined with a natural jumping ability, and the temperament of their Welsh Mountain Pony forebears make the Welsh ponies and cobs really great riding ponies and all rounders.

Welsh mountain section A and Welsh pony section B

I think this Welsh mountain stallion is beautiful and even though he is wild and a bit unkempt he really shows  where the different types of Welshies get their looks from. 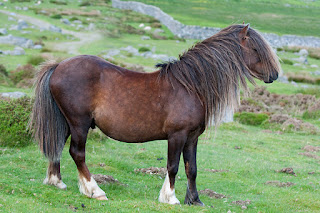 Some last photos from Carneddau - they seem to be very itchy ponies !! 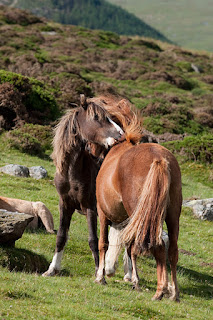 You scratch my back and I'll scratch yours 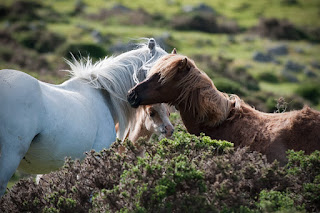 Little foal in the middle wants a scratch too 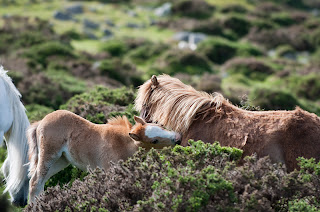 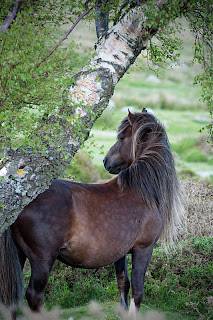 The stallion has to scratch his own bum !

Just one last photo - what do you think of this ?  It was an experiment, but I think I like it :-) 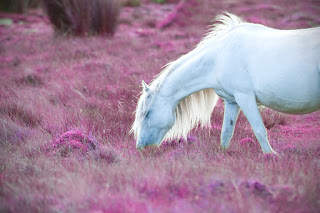 I'm really looking forward to writing the next blog - it will be about the beautiful Fells of Cumbria.  I have some great photos of them, so please come back to read it.

Posted by mitch mcfarlane at 05:35 No comments: